We Deliver on Promises and Operate with Integrity

Ever since electricity was discovered and utilized to create light, we have relied heavily on electric light to make our lives easier. From the first carbon arc lamp to the Geissler tube, the incandescent bulb, fluorescent bulbs, and finally the LED light bulb — there has been quite an evolution of electric light. With each step, the product became safer, longer-lasting, more efficient, and the range of uses for the light bulb skyrocketed.

Today, while fluorescent lighting is still very popular, especially in commercial spaces, the LED light bulb is quickly becoming known as being the star of the show, and for good reason. If you’re considering converting from fluorescent to LED lights in your commercial building, here are a few of the biggest benefits.

Compared with incandescent light bulbs, light-emitting diode (LED) bulbs use between 75% and 80% less energy, according to Consumer Reports. Depending on the size of your building or office space, it may require hundreds or even thousands of bulbs to sufficiently brighten up the space. With incandescent or fluorescent lights, that’s a lot of energy. And when many LED bulbs last up to 50,000 hours, when they’re used 12 hours a day, bulbs could last up to 11 years. A downside to LED lights is that there is a bigger upfront investment, but imagine not having to replace a bulb for over a decade. And imagine the kind of savings that you can see during that time.

When converting fluorescent to LED, safety isn’t always on people’s list of benefits; however, according to energy.gov, compact fluorescent lights (CFL) release about 80% of their energy as heat. LEDs emit very little heat. Because LEDs require less power, they can operate effectively on low-voltage electrical systems, which can be incredibly important if something were to go wrong.

Traditional lighting emits an orange or yellow glow, affecting how the color of an object appears under that light, this is known as the color rendering index. LEDs have a high CRI, meaning that the light produced is closer in appearance to natural light. In spaces like a museum, the color of the light emitted can have obvious negative effects. 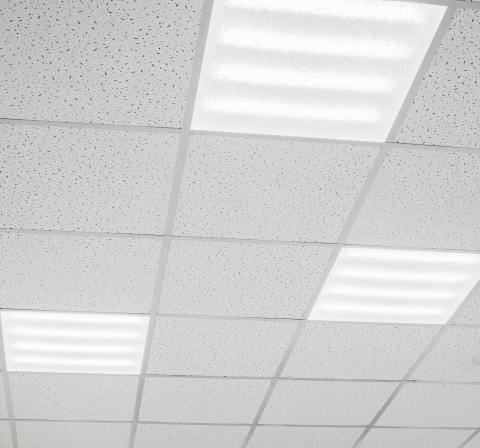 Both incandescent and fluorescent lights emit UV rays and infrared light, which can have significant downsides, including heat produced and UV rays can damage nearby materials or goods, such as artwork or heat-sensitive items. LED bulbs produce nearly zero UV emissions, making them safer and easier to use a wide range of applications and spaces.

LEDs have the ability to operate at any percentage of power, meaning that the light can be dimmed and function more efficiently, as well as last longer. In certain areas, dimmed light also enhances the environment, creating a more comfortable, relaxing space. Fluorescent lights do not dim well at all.

Converting fluorescent lights to LED may seem like an investment that won’t have a high enough return. However, when you fully understand the benefits of LED lights, it’s easy to see that it’s well worth it in the long run.

At National Efficiency Supply, we supply commercial lighting for a variety of industries, including schools, museums, office spaces, and more. We are passionate about helping business owners understand the benefits of retrofitting their fluorescent lights and utilizing the power of LEDs to create a more efficient building. Learn more about our LED retrofit incentives and schedule a consultation with us today.